The Strange Love Hotel, also known as the Fuurin Motel, is situated in a small town in the Chiba prefecture. It only had 10 rooms but each with a different theme such as ‘Medieval’ or ‘Typical Japanese’. Many rooms had their own spa’s (onsen-as they are called in Japan) and privat gardens. 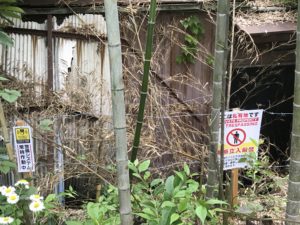 into the place was our first struggle. It seemed pretty boarded up with barbwire all around the building also. The trees were a bit dangerous also. They had spikes all over their stems. Luckily I saw it in time before either of us held onto one to climb down a small slope to get to the building. Also the shiny signs were not very comforting. I can’t read Japanese but unfortunately these were in English also. Plus the image was pretty clear also…we were not really welcome here. This being our first location on our Japan trip, made me a bit nervous and it took me a while to relax and take my photos.

Inside it was pretty dark and damp but I loved the decay!