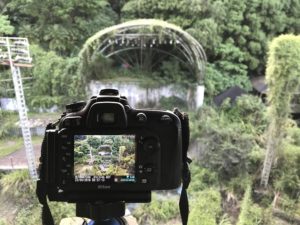 One of the most popular and well known abandoned place in Taiwan has to the “Encore Garden” theme park. Of course it was also on our wish list for our trip around the island.

We had heard about security on scooters and people getting caught so we arrived at the park well before the sun woke up. We parked our car on a small parking at the side and as soon as we got out, some dogs started barking very loud. Not a good way to start…but we decided to just go for it and hope for the best. 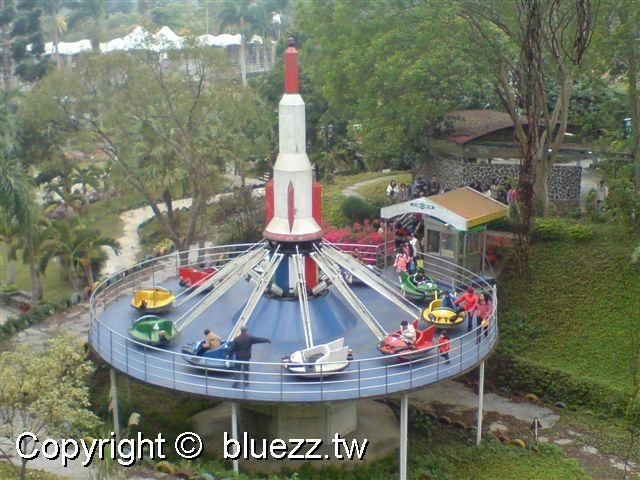 We wanted to get away from the houses and the barking dogs as quick as possible so we grabbed our bags and tripods from the trunk and started walking away. A little down the road we saw a spot where we could enter the park. The only thing was that the bushes which we normally had to crawl through, had been cut and all the waste was on the ground. So that meant we had to crawl over it and get onto the property in full sight of the guard booth at the entrance.

We kept our fingers crossed that the guards were either not there yet or sleeping still as we made our way over the pruning waste. As soon as we stepped on the path we immediately made our way across to get out of sight. There we waited a little to listen if we heard noises of scooters…but all stayed quiet.

So now it was time to explore the park!

After being a little lost in the start of the explore, we soon found ourselves right next to the bumper cars. We had seen pictures of them being partly covered in mudd…well during our visit they were almost completely gone. I can immagine that within a few years, they will be completely  covered in mudd.

Right next to it was a merry-go-round with horses and also a giant stride. At a lower level we could see the space carousel with rockets. All being overgrown with weeds. After we took pics of these attractions it was time to search for the big amphitheater. This spot has to be my fave of the whole place. Completely taken over by nature…I loved it! 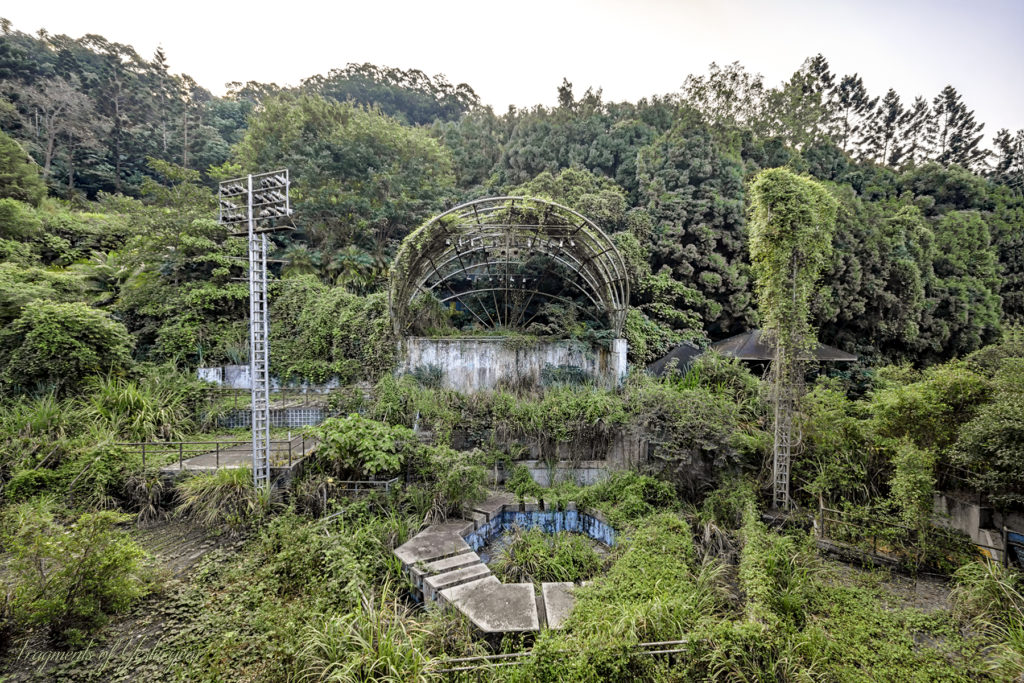 We were wearing long sleeves eventhough it was already pretty hot, but those were to protect ourselves against the mosquitos…well that didn’t work at all! While we were shooting pics, we were bitten constantly. And if that wasn’t bad already, Taiwan has one very annoying weed with pointy seeds that cling to you as soon as you touch it. My whole arms and legs were covered in them. The bad thing is that they tend to poke through your clothes and also ITCH LIKE CRAZY!

After a few hours exploring we were both soaked in sweat, so it was time to head back to the car. The whole time we had been on the look out for patrolling security but the park was still as quiet as when we first entered. When we got back to the entry/exit point some dogs were outside the booths of the guards and as soon as they spotted us, they started barking. We quickly made our way over to the pruning waste and climed over it as fast as we could. Other than the barking dogs, still no sign of guards. Fortunately! Outside the ground we walked over to the car and sat down to rid ourselves of the seeds and have drink. A man was looking at us from one of the houses across the street, I waved and smiled at him and his face lid up and he smiled and waved back. Nodding in a friendly way…I guess he knew exactly where we had been and approved.

So we did it: we explored Encore Garden without any problems!